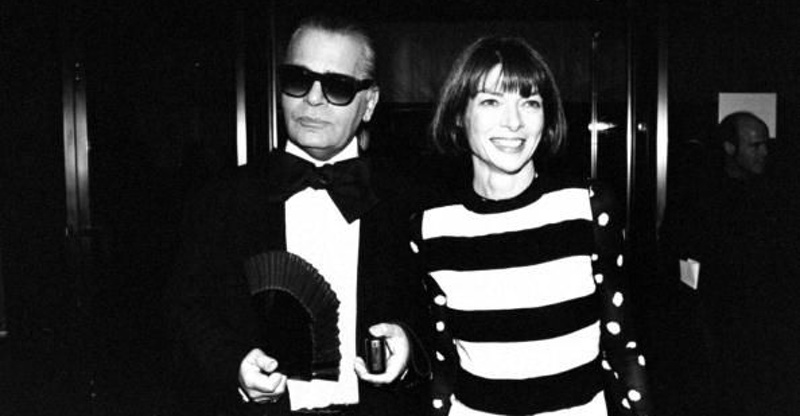 This article was originally published in October of 2010 and is being re-posted today as my paltry way to pay homage to a giant, whose passing will certainly affect the axis of the fashion world forevermore.  As this article illustrates, Mr. Lagerfeld influenced me in many ways, both small and large, and for that I will always be grateful.

I live in Atlanta and I’m a sweater – and not the cashmere kind.  It’s so bad, I can’t even stretch it to call myself a “glower”.  My childhood best friend was a sweater too.  A bout of youthful ingenuity helped us develop an extensive menu of subtle hand gestures and “safety” words to let the other know when their upper lip looked like it needed windshield wipers.  Of course, it always happened in the most hideously inconvenient moments, perhaps at a party or with a new boyfriend.

A couple of decades later I have made peace with my sweaty-spice status.  As a result, I have really had to think outside the box to come up with seemingly intentional and chic ways to deal with my embarrassing little problem.

Some days ago a genius new solution hit me like a bitch slap to the face.  The hand fan – a la the Karl, himself!!! I could totally pull that off!!

I needed one that could hold up in the waste dump I call my hand bag, be black ( that goes without saying ) and be easy to snap open and close in mad gesticulations of diva-esque drama to help re-iterate whatever point was being ranted about at the time.  I went to the Google-machine on my computer, typed in “hand fan”and it led me right to Amazon.com.

I discovered a million stores ready and able to fulfill my fan fantasies.  Who knew?  There were Chinese paper fans for like $2.00.  There were, “performance” fans for about $10.00 which were made of strong nylon in standard and larger sizes – the largest ones perhaps intended for those chicks who do those sexy fan dances in old fashioned burlesque shows.  There was even a vintage gold one from Tiffany’s  that was $4,500.00….totally worth it when I change tax brackets.  The best one I found online was from NanaLulus Linens.  It was a Victorian inspired lace situation for about $20.00 and its, “coolest hand fan on the web” (awarded by myself) status was somewhat tangentially influenced by the fact that the site you can buy it on includes a section it called, “The Victorian language of fans.” Hello!?! If learned it, however, would anyone else know what my fan was talking about??!!!  Who cares?  I had to get that one.

So, along with verbose and Victorian, I decided to get a couple ( 5 ) of the normal size of the Chinese style Nylon-Cloth fan from House of Rice – for about $12.00 each.  The multiple unit purchase of this one seemed essential as it looked to be the veritable workhorse of the fan world.  I also splurged ($7.00) on a black marabou fan, for when I wanted to channel a little Zsa Zsa – or embarrass myself more than usual.

As a result of this fan acquisition,  I feel slightly cooler, slightly less sweaty, but toooonnnns more Karl-iciosly fab.  So, hear me now, even if you’re not a sweater, even if you live on a Polar Ice cap get yourself a hand fan. Stat.

Trust me, you’ll be all the cooler for it.